As Rebecca’s mentioned, I’ve been off working on some astronomy stuff for the past few months, which essentially consumed my life. Luckily, since the semester’s wrapping up and finals are almost over, I’ll now have more free time to both post on here and continue my research. So look forward to more activity in the coming weeks! 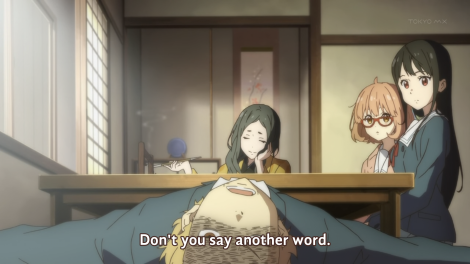 AKIHITO I FEEL U BRO – HALF-SPIRIT BROTHER FROM ANOTHER YOUMU

I’ve talked about light novel (LN) adaptations (LNAs) beforehand here, and I’d say for good reason. A casual glance at any of the seasonal anime lists shows that they tend to grab a pretty decent chunk of airtime, and since I seem to enjoy them (much more than seems to be warranted at times), I tend to think a lot about why exactly I like them so much. Or, on the flipside, what about them tends to infuriate me. While I’m not the only one who really tends to enjoy them in the aniblogging community (at least, going by Froggykun’s posts on the subject), I do feel I’m in some weird minority, because–in all honesty–most of the time they seem (and are) pretty juvenile. 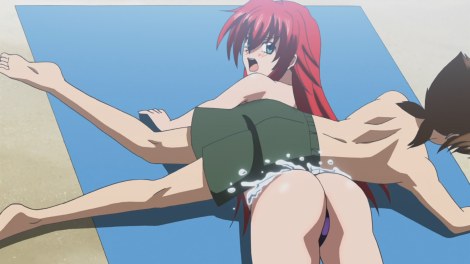 I say that, but my personal tastes tend to say otherwise. This season, I found that my most anticipated shows each week were (in order): Kill La Kill, Outbreak Company, Strike the Blood, and NouCome. (I’m stalled on Walkure Romanze at the moment, but that would be up there otherwise if I had time to continue it.)

Like seriously, wtf–every single choice after Kill La Kill (which is a given, pretty much) is a LNA.  Why do I keep coming back to them? Ultimately, I think it’s because, out of most of the anime that’s out there, LNAs feel the most like, you know, anime, to me. They seem to exude this nostalgic feel, throwing in tropes, character designs, plots events, dialogue, etc., that just seem so unique to anime. Or, at least, to the harem/romcom genre as a whole (dramas are a different story).

But that’s not all, because many times LNAs are actually quite clever and underrated. Take Infinite Stratos and NouCome for instance. At first glance, they seem ridiculously stupid. One involves a guy somehow gets access to this exclusive mecha only women could get, so he enrolls at an all-female school. And there’s no real worldbuilding here – only HAREMBUILDING (infinitely superior, of course). The other centers around a guy who has a multiple choice complex (yes, that’s right – if he doesn’t choose one of the options that pop up all over his “screen”, he’ll die), where he’s forced to do ridiculous stuff like sniff a porn mag in the street (harhar so funny!). And, of course, he’s surrounded by girls who he all accidentally romances (and, of course, one who he lives with), even though he’s one of the complete loser “Reject 5”. Those both don’t seem SODEEP to me. However, as Froggykun points out, it’s actually some good stuff that can make us think about the importance (or lack thereof) of choice in our lives and on the objectification of anime characters, both emotionally and physically. We just have to see them that way. I actually have a good story to tell about Date A Live earlier this year, where the show inspired a similar, eye-opening experience (and discussion)–but that’s for another post. 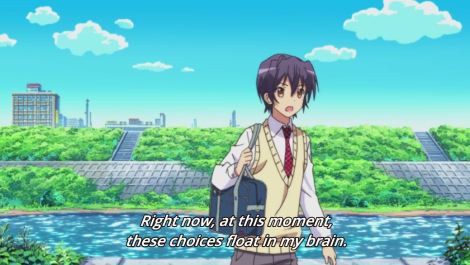 So LNAs aren’t all garbage. But they’re not all great either. Many of them fall into the trap of becoming too dependent on the exact tropes that they’re drawing from or ripping off, and thus fall flat while trying to be deep and funny and/or meta at the same time (Maoyuu Maou Yuusha is a prime example of this). In fact, the meta-callback nature of most LNAs is becoming so common that it itself has essentially become a meme. And its one I think that has actually inspired some responses, both from Kill La Kill (which just doesn’t shove them INYOURFACE and actually has a memory longer than a season or two) and from Monogatari: Second Season (which called out other adaptations for doing it early in their run). I think this type of thing tends to piss me off the most, because it seems like they’re being posers rather than just admitting to what they are. But then you end up with shows like Unbreakable Machine Doll, which could use a little toning down of some of their tropes (especially Yaya). 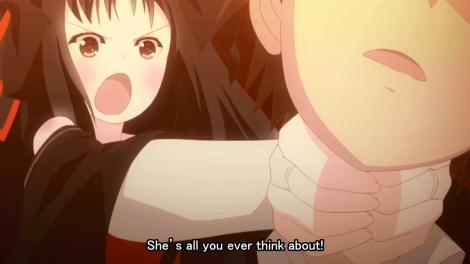 It’s a fine (well, maybe not so fine, but it has a finite width that some anime tend to miss!) line that LNAs–and most anime in general, actually–have to walk down. You want to draw from a database of elements to not only give the fans that “anime” feeling I talked about above, but you need to make sure that, within such tropes, elements, etc., it still feels like genuine characters exist. This is true from a story perspective (you need people to be able to empathize or self-insert somewhat), a comfort-level perspective (tropes in anime make me feel warm and fuzzy inside most of the time), a marketing perspective (there’s a reason they’re still around), a fan-participation perspective (people will only participate in fandom surrounding characters they genuinely care about), and a host of others. I mean, even for all the crap that Guilty Crown gets on the anisphere, I think the reason it is genuinely popular among most of the anime community at large is because the characters (with some “minor” inconsistencies) feel like real people. Even if they turn out to be reborn, incestuous, world-destroying imoutos. 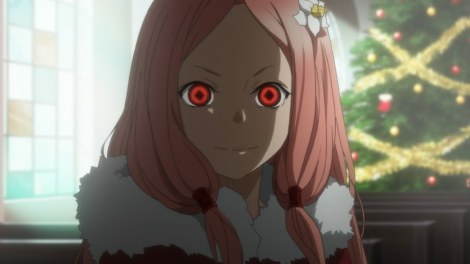 But that’s a lot of rambling, and no so much actual anime. I’ve already mentioned a bit why I liked NouCome, so let’s talk about why I look forward to Outbreak Company and Strike the Blood.

Outbreak Company, I’d say, is probably one of the most pleasant “meta”-esque LNAs I’ve seen in a while. Part of the reason is because it avoids many of the pitfalls I’ve mentioned above. I don’t think at any point during the show does it seem to take itself “too seriously” or impart some meaningful life lesson on us all. The characters don’t feel like walking tropes (although they are, and the show even deliberately points this out to us), but rather like trope-y characters, which I’ve come to realize is a huge difference. Plus having a protagonist who is not only the perfect otaku stand-in (in both a good and bad sense) but who also has his own personality and actually earns his harem is fantastic. 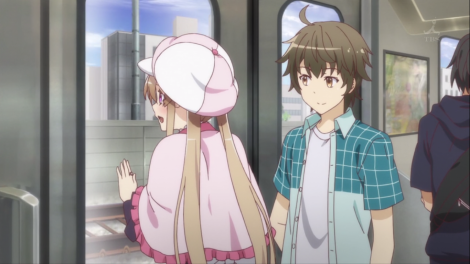 Furthermore, most of its anime references, while profuse, aren’t blatantly pandered around in your face while the show intimates something along the lines of “Isn’s this funny? Yea – this is funny. WE’RE SO CLEVER!”. As a further bonus though, Outbreak Company is the first show outside of OreImo that I’ve seen which very actively involves itself with the whole shebang of otaku culture, and not just otaku tropes. It simultaneously parodies both itself, its audience, and its source material, while paying homage to all three at the same time.

For example, there’s this great part where a video from a soccer game (excellent) at Shinichi’s school in the Holy Eldant Empire gets leaked to the outside world. So Shinichi comes up with this brilliant plan to disguise it – make a horrible rip-off movie around the soccer scene that’ll piss all the otaku back home off and get the “project” cancelled, which’ll dispel suspicion on anything weird going on. In doing so, he rips copious amounts of scenes not only from recent shows (such as Crime Edge), but also Rental Madoka (clearly a parody of the actual Madoka, sorta). But, beyond just having small snippets of scenes, they go through the effort of recreating whole entire scenes from said parody of a “real” show, hence making a parody of a parody, a simulacra, which is integrated seamlessly into the plot. This is in much the same vein as Stardust Witch Meruru was in OreImo, and in my opinion is pretty well-done. And the whole premise, with its entire basis on self-referencing and otaku culture, is meta at a level above simply making callbacks, in a way I very much enjoy, because this, for all its ridiculousness, is actually quite a clever to both comment on, parody, and pay homage to the fanbase all at once. 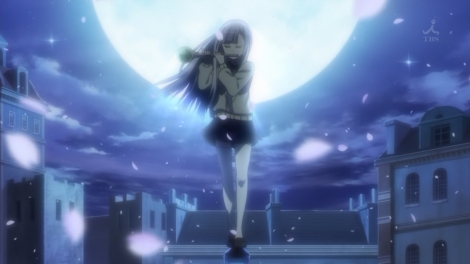 It would be criminal, however, to overlook the main theme of the show: soft power. Cultural influence, soft power, indirect/persuasive power (or whatever you might call it), is fascinating, especially since it has a ton of real relevance to very involved members of the anime community like us. The draw of “otaku culture” is strong, and the idea of Japan using it as a type of real (and universal) force rather than just having it spread naturally (as it sort of does now) has been a big thing in Japan (at least in the government) for quite some time. And, for the most part, has not been a great success story since most of us overseas barely even know about it.

Because of this, the idea of having the government back an “Outbreak Company” (clever clever) in Eldant, headed by an otaku, and helped by the Self Defense Force (JSDF), which is actually successful, is quite the intriguing story idea. I’m still undecided if it’s meant to be sort of an escapist novel (in the vein of LNs as a whole) for those who are entranced by the idea of government-led anime-backed soft power, a critique on the current government’s stance, an actual endorsement of the idea, or even possibly some combination of all of the above (or none of the above – I could just reading too much into it!). 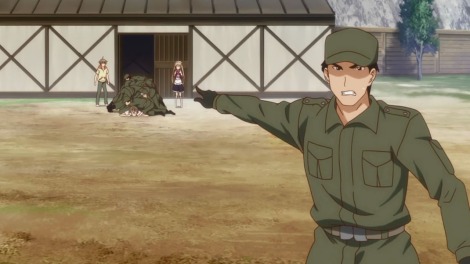 Clever use of the JSDF, as it appeals to military otaku while also making an interesting, possibly political, statement. Plus is just plain hilarious.

So…judging by the length of this post, ad the fact that I missed midnight, I’ll probably end things here tonight. I’ll just have to post about Strike the Blood later. Glad to be back guys, and thanks for sticking with us! :)