Josh likes to complain because I have a bad habit of starting random (highly-rated) shows without telling him and usually right after he has recommended an entirely different show for me to watch. Anyway so this was one of those shows I started watching sort of spur of the moment because I was bored and browsing around on Hulu…it happens. I think that while I definitely can say that overall I enjoyed the show, there were some things that stuck out to me as kind of irritating. Then again, maybe I need to go with Josh’s more laissez faire style of watching shows where he has pretty much mastered watching/accepting shows on their own terms. Unfortunately I don’t think I’ve quite gotten to that point.

Sternbild City is home to people called “Next,” who use their special abilities to protect the people as superheroes. These heroes solve cases and save lives so they can wear sponsor logos or acquire “hero points.” Their activities are documented on the popular program “Hero TV,” which picks the “King of Heroes” in a yearly ranking. The veteran hero Wild Tiger has always preferred to work alone, but now he’s been assigned the rookie Barnaby Brooks Jr., who has a different perspective on being a superhero. 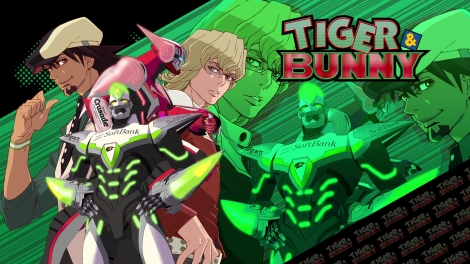 Don’t get me wrong, I actually really liked Tiger & Bunny (T&B), I thought it was really amusing and a fun show to watch. The biggest thing was that I had to put aside my skepticism and not take it seriously, or rather go with the flow and enjoy the show on its own terms. I do think that it did some things really well. I particularly enjoyed how it sort of put a new spin on the traditional superhero show paradigm and then the super intense and hilarious bromance between Kotetsu and Barnaby. I usually get annoyed by bromance, but this one sort of worked for me. I also thought that the show had a nice message, a little bit cliched, but it’s heart was in the right place. And then my absolute favorite part of the show had to be the fact that Kotetsu’s 100 power activation time went from 5 minutes down to 1 in a very clear sexual innuendo. Yep. It was pretty hilarious, I laughed a lot and I have no shame.

However, even though I very much enjoyed watching T&B for pure entertainment value, it was chock full of something that drives me absolutely insane. It is the scourge of young adult novels and the most recent Disney movie. Dun dun dun. That’s right. PLOT HOLES. There is no way to kill something for me quicker than to fill it with gaping plot holes and ends that never seem to get tied up properly. That’s pretty much why I hated Frozen (go ahead stone me, I dare you), that plus the insipid nature of the film and the fact that it was a BIG FAT FAKER. Based on “The Snow Queen” my ass. Anyway that’s neither here nor there. The point is, T&B was also riddled with plot holes that drove me just a little bit crazy. Let’s talk about them shall we?

My feelings on Frozen: “Let it No”

So first off, there was the weird thing going on between Blue Rose and Kotetsu. Am I the only one who thought that was kind of creepy? (Although it was pretty great when she was in the book store looking at books about dating a man with kids.) Josh didn’t think it was creepy, but then again he’s also a fan of saying things like “incest=wincest” so I always take his opinion with a grain of salt. Creepiness aside, it was a weird plot device that sort of existed throughout the show, but kind of popped in and out sporadically, as if the writers couldn’t decide whether or not they wanted to go for it. It was as if they got wet feet at the last minute and then reconsidered and then got wet feet again. Then again I’m glad they didn’t really dive into it hardcore since it was a little bit uncomfortable for them to be shipped. I mean seriously, couldn’t they have made Blue Rose a little bit older or Kotetsu a little bit younger?

I’m pretty sure Kotetsu is 30ish and what is she like 17? Eh, not really my thing.

I guess they decided that they wanted to focus on the bromance between Kotetsu and Barnaby more, but in my opinion that relationship was also really inconsistent. Barnaby tended to blow hot and then cold and I forget which episode it was in, but his attitude had a magical 360 turnaround that really bothered me. I knew just from reading about the show that they were going to end up in a bromance, but the progression of said bromance was unrealistic to me. There was no easing into it, it was more like ‘oh hey we’ve decided to make this a bromance so let’s just go for it full speed ahead’! I would have preferred a more realistic progression of their relationship, which I know is probably asking a lot for a show like this, but hell it would have made me happier. I know I’m a little bit too particular sometimes XD.

Have I mentioned that chibi is the best?

Onto the next issue. This had more to do with the overarching structure of the show than anything else. Blue Rose and a few others got backstories, but the show never did anything with them. Although it was kind of depressing that Rock Bison got totally gipped on the backstory whereas most of the others had backstories that were irrelevant to the overarching plot. Sky High’s backstory was somewhat relevant, but the show could easily have done without it in theory. When I think about it, the only plot that remained consistent throughout the entirety of the show is Barnaby’s story about getting revenge for his parents. However, my biggest question around the main plot is: why the heck did Ouroboros play such a big role in the plot when at the end of the day it was really Maverick who was responsible for the death of his parents? I guess I just wanted some more consistency in terms of villainy. Ouroboros was played up to be such a huge part of the show and then ended up being pretty much a false lead. I understand the function it served, but it seemed like a lot of wasted effort to me. I mean seriously, if the guy could alter memories then why not just convince Barnaby that his parents died in a car crash or something and not give him the chance to develop a revenge complex in the first place? Sometimes super villains are not the sharpest tacks in the box. 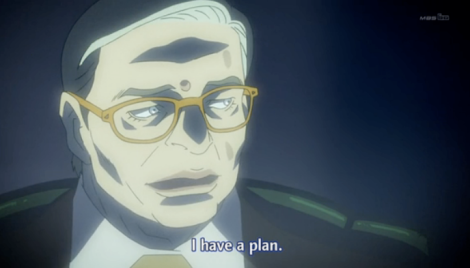 Why do evil people always have weird moles?

Next plot hole: Why the heck did Rotwang hate NEXT so much? It would have been awesome to get a little bit of context considering the guy put all the heroes into a Saw-esque confinement and tried to get them to kill each other. If there was a place in the show where a bit of backstory would have been helpful to understanding the plot it would have been here. The way the show portrayed it basically just makes him seem like a motiveless psycho asshole who hates NEXT just because he can. I mean hey, that seems to be a pretty common trope in a lot of poorly executed stories, but the fact that they bothered to give backstory to a bunch of fairly minor characters and not this guy makes me wonder a little bit.

I think the final plot hole worth mentioning is probably the inclusion of Lunatic. I mean what the hell? They set him up to be a super important anti-hero character who is going to be integral to the plot and then he kind of just flakes around and doesn’t really do anything of major importance except for jumping in at the last minute as a beautiful deus ex machina to save Kotetsu.

I love how they always insert some obscure Greek or Latinate reference whenever they’re trying to make someone sound evil or intelligent. (Thanatos is the Greek personification of Death by the way.)

But yea, Lunatic didn’t really do a whole lot except for run around killing random murderers and getting in the way of the superheroes a few times. In all honesty, the show would have functioned perfectly well if they just got rid of him entirely.

So what do you guys think? Was the show ruined a little bit by all the gaping plot holes? Or was it entertaining enough that we can forgive it?