Hey guys! Josh and I have been busy with traveling and holiday plans so our posts have gotten a bit bogged down (it’s largely Josh’s fault for playing videogames instead of working on his posts :p). Anyway, I’ve started re-watching Hell Girl- no particular reason it just kind of caught my fancy- and decided I’d write up my thoughts on what I’ve re-watched/remember about the show. This was supposed to go up around Christmas, but we were in the sticks so internet was being kind of finicky and I couldn’t get my pictures up.

I’m only going to talk about the show in context of season one (Jigoku Shoujo) since I’d rather not get into the complicated details that happen in the subsequent seasons.

Here’s a brief synopsis for those of you who haven’t seen it:

Somewhere in the vast sea of the Internet, there’s a website that can only be accessed at the stroke of midnight. Known as the Jigoku Tsushin (Hell Link), rumor has it that if you post a grudge there, the Jigoku Shoujo will appear and drag whoever torments you into the inferno. Very little is known about the girl—all we know for sure is that she lives with her equally enigmatic grandmother, that three magical straw dolls accompany and serve her, and that whenever a posting on the Jigoku Tsushin moves her, she becomes the Jigoku Shoujo.

I had forgotten how damn dark this show was. I mean you’re probably like, “come on Rebecca it’s a show about sending people to Hell–it’s obviously going to be dark” but I seriously did forget just how twisted some of the characters are. When I started rewatching I worried that I wouldn’t like it nearly as much as I did the first time I watched it, but I was pleasantly surprised to find that I’m just as hooked on the show as I was the first time. I was kind of going through an emo phase (yep I was one of those) back in high school when I first watched this show so I think it’s a very different perspective watching it now. That and the fact that I’m much older.

One of the things that struck me the most about the show is how negatively it portrays humanity. In the episodes so far, not a single person has failed to pull the string on the straw doll given to them by Hell Girl. Some of the things they want to kill people for are incredibly petty as well. Then again, the show is clever at showing this. Some of the grievances are legitimate e.g. one episode where a girl has a creepy stalker who tries to kill her father and his work associate in order to get to her. Ok great. I’d probably send that guy to hell too. But then there are the more ambiguous cases, the ones where someone does something shitty, but it was also the fault of the other person that it turned out as badly as it did. For example, there is an episode where two sisters open a bakery and it gets shut out of business after a bigger bakery steals their idea. My problem with this episode is that the reason the dessert was stolen is because one of the sisters was an idiot and shared the idea with the other bakery owner.

Sure it’s a shitty thing to do, but is it worth my eternal soul to get revenge? Probably not.

Right so it’s kind of her fault. Or do you think I’m being too harsh? I guess my problem with this show is a similar problem to the one that I had with Death Note. Where do you draw the line about who deserves to die/go to hell? The difference here is that while I can understand L’s puritanical moral code to a certain extent, Ai Enma doesn’t seem to have much of one. She seems to allow almost anyone with a grudge to put in a request and doesn’t do too much analyzing of the situation before she steps in. This becomes problematic when she gives a doll to someone, but that person turns out to be a real asshole and gets taken out by someone else before they can do anything. It technically turns into a situation where if two people hate each other enough and have legitimate enough grievances it turns into a game of who pulls the string first, which completely undermines the process anyway. Or one episode turns into a hell bound suicide pact, which to be honest was really perverse.

Better you than me…

The show tried not to be too black and white in terms of portraying people, in that it often tried to give a positive bent to some of its antagonists, but in doing this it ended up doing exactly what it didn’t intend to do. No one screams and cries and confesses to their crimes at the end when Ai gives them a chance to repent their sins. I mean really? Unless every single person she sends to Hell is a sociopath (maybe they are?) they’ve got to be capable of feeling some sort of remorse or guilt. I don’t know about you, but I’d be groveling on the ground and swearing things on my firstborn child or donating all my wealth to starving children in third-world countries or something. They could all just be sociopaths though. These people instead blatantly deny that they did anything wrong, some go so far as to feign ignorance as to what Ai is even talking about in the first place. I’d say this is pretty black and white if you ask me.

On the other hand, I don’t know if I’m the kind of person who would ever get to the point that I could hate someone so much that I would want them to go to Hell if it meant my soul was on the line as well. Sure it would be nice if those jerks who used me for target practice in high school gym class got some retribution, but would I want them to go to hell? Nah. It provokes an interesting question though: what kind of person does it take to want another person to legitimately go to hell? Do you think that the average person is capable of that level of hate? I’m really not sure. What do you guys think? Do you think you could ever get to a place that you’d hate someone so much that you’d want to send them to hell if it meant you’d end up there too? I’m going to say no, personally, but that’s because I’m a chickenshit and don’t think Satan and I would get along very well.

Also, just for shits and giggles: 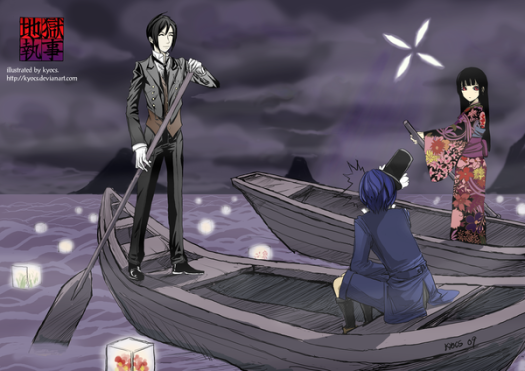 For those of you who’ve also seen Black Butler…XD