So, as I’m sure some of you might have guessed, I’m now back in the US enjoying the awesomeness that is school starting back up. It’s been a busy couple weeks, and I’ve barely had time to check in on the blog until earlier this week. At the moment, I’m predicting that my blogging output is probably going to decrease substantially, both because classes and clubs and stuff take up time, frequently at the expense of blogging and anime because they keep me away from my room, and because much of my free time at the moment is going into attempting to finalize the work I did over the summer and prepping them for publication.

By the way, here’s a sorta panorama of my college room, just in case anyone was doubting my otaku cred. ;)

It also means I didn’t manage to finish blogging about my time in Japan while I was there, contrary to what I was hoping. However, I think I did do much better than I would’ve if I hadn’t set a goal for myself. Plus now I have material for posts throughout the year. *shrug*

However! One thing I did learn was that I find it really difficult to talk a lot about the minutia and details of all the stuff I was doing in Japan as standalone things. It seems – in the end – I really do just like talking about big picture stuff, and trying to tie little details back to said picture. I might try and branch out a little bit more in the future (and I have been trying to experiment with new writing styles in a couple of my previous posts at this point), but at the moment I’ll try and stick to what I at least take the most pleasure in writing.

Which of course brings me back to Kyoto. I originally wrote a long extensive post about some of the stuff I did there. Which was cool and all, but ultimately I think not what I wanted in retrospect (and most likely quite boring). Because at this point I want to talk about how Kyoto felt rather than what it was. And it took a visit (back) to Beijing to put it in perspective for me. 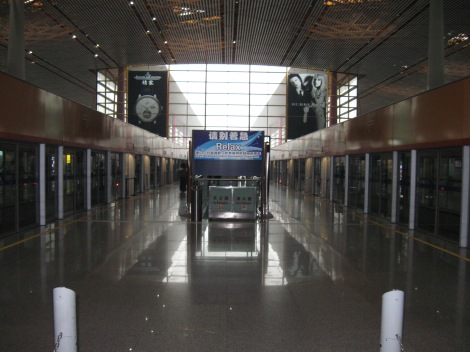 What better sight could there be to greet you at the Beijing airport?

First, some background. I’m actually half-Chinese (on my mom’s side), and spent 5 years (3 in Beijing, 2 in Shanghai) of my childhood (from 5-11, minus a “gap” year back in the US) in China. This means a couple things:

Since I was staying in Japan over the summer, I decided to take a trip back to China to visit my relatives, as well as to get a new perspective on the place I grew up in. [I also was traveling around the area with my best friend from high school, but whatever.]

In short: I decided to come home.

Now, I know this is a little (quite a bit, actually) cliched. But the fact that I can even make such a cliched statement – and moreover actually believe it – was a realization in and of itself.

As a child, I never stayed in a single place (or country!) longer than 3 or so years, and so the concept of a “hometown” seemed kind of, well, foreign, to me. However, when we finally settled down for most of middle and high school, I finally had a chance to put down roots and call a place “home”.  That, I thought, was the end of it. 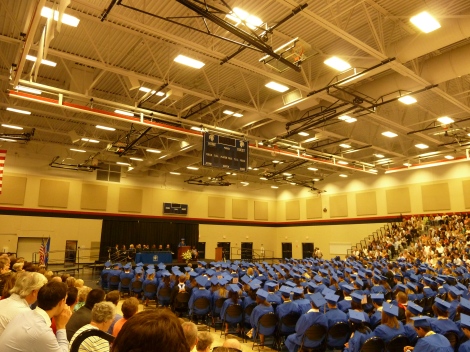 My high school graduation, as a result, was a really special moment for me, since it was the symbolic end of the only time I had actually finished a block of school in the same place. It was the end of my time in a place where I now felt like I had “grown up”, with friends who I felt I had really got to know and care for. It was really touching.

But it seems memories and experiences work in strange ways, since during my time in China, I really did feel as if I had come home, even if “home” was a lot different from what I remembered.

Note: Everything I’m saying hereon out is “off the cuff”, based on my experiences in Beijing and Kyoto. I’m happy to change any inaccuracies or misleading perceptions I end up reporting if you let me know either in the comments or by e-mail. 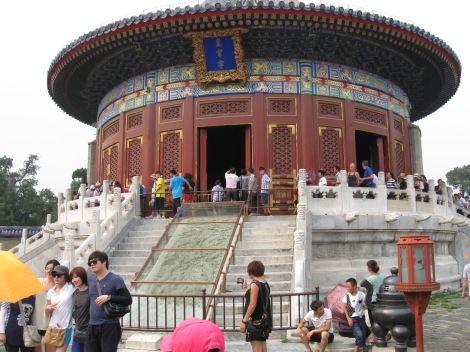 The huge crowds at the Temple of Heaven (shown in part above), for instance, was completely different fro a decade ago, when the place was deserted. The increased tourism is most likely a good sign of an increasing standard of living, but still a bit off-putting if you’re hoping for a more “personal” experience.

This serves as a good transition to talk about Beijing, because my experience there this summer really gave me a framework to put my time in Kyoto (and more generally, in Japan) in perspective. Plus it also allowed me to reconnect with some of my past life in new ways (anime-related concept here), seen through the eyes of a much older me. 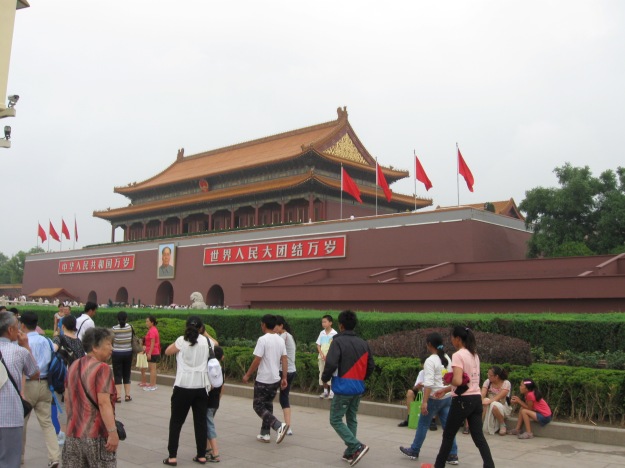 My first (and only) memory of the Forbidden City actually involves 6-year-old me getting lost and wandering into a guarded area, getting shouted at by the guards, and then running back to my mom on the verge of tears because I didn’t understand what was going on. So revisiting the place was nice.

Beijing is a city with history, a rich history that one could argue surpasses that of the entire Japanese archipelago (by certain very biased metrics, of course; “ranking” histories isn’t really my thing or something I really agree with). But it is also a city of great change, caught up in China’s wave of modernization. The smog in the city is intense, as one of my friends who also visited this summer can attest. Most days the air is permanently filled with a gray haze that can sting the eyes and frequently blocks out the horizon. Construction sites are everywhere, as are new apartment complexes, roads, shops, and more, all painted in beautiful shades of gray and shaped like gorgeous concrete blocks. Many of the places I’d remembered as a child had either been redone or torn down in the 9 or so years I’d been gone. 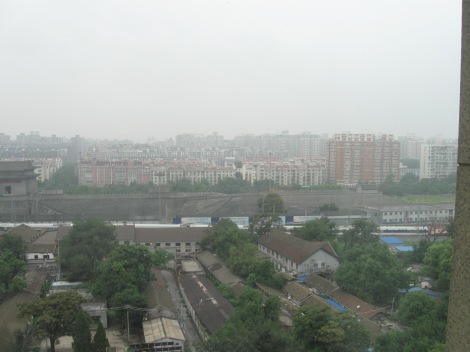 Here’s the view of Beijing from hotel my friend and his dad were staying at.

Against this rush of industry, Beijing manages to preserve its heritage. Famous historical sites such as the Forbidden City, Temple of Heaven, and the Summer Palace remain remarkably preserved and famous tourist attractions.

Here’s the view of the grounds of the Summer Palace, essentially China’s version of Versailles (that actually was burnt down by the French and subsequently reconstructed).

As shown above, however, their vibrant colors clash with the monochromatic scenery and the smog, as well as the endless noises from the traffic all around. 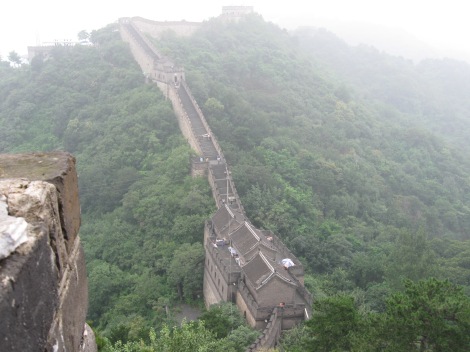 Luckily, the Great Wall (or at least the section we went to about an hour and a half outside of the city) still has decently good skies.

More historic sections of the city have ordinances preventing them from being torn town or expanded. However, a decent number of them are in disrepair and coated in layers of dirt and muck, filled with crumbling bricks and older residents who seem to be remnants of a time soon to be forgotten. In short, Beijing seems to me to be the quintessential clash between past and present, the battleground of a war between history and the future. 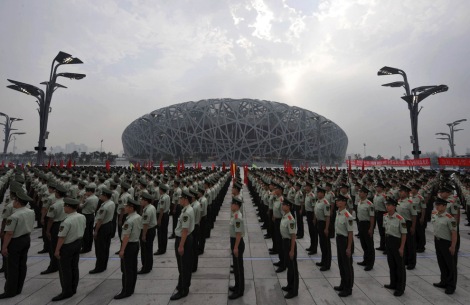 A picture from a few weeks before the 2008 Olympics, which I think showcases the dichotomy well. Although we didn’t end up visiting the area, I’ve heard may of the buildings are still kept in very good shape (albeit empty).

It is with this view that I now looked at my time in Kyoto, because Kyoto (today) seems to be the furthest thing from this view.

Kyoto seems to be a city that has embraced its past in the present, combining both as it moves forward. There is no encroaching march of modernization here, but historical sites merely set within a city that has changed since it’s inception. The temples don’t seem to clash with the modern buildings – they instead seem to complement each other.

Kabuki theatres stand across the street from supermarkets. 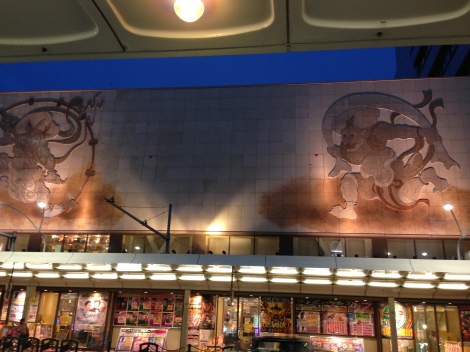 And the shopping districts themselves many times have a historical tinge to them, a traditional vibe to an otherwise quite modern place. This image I think symbolizes the fusion between past and present quite well.

Which themselves stand over subway stations, frequently painted with traditional nihonga designs and whose characteristic “train is arriving” sounds take inspiration from traditional Japanese music. 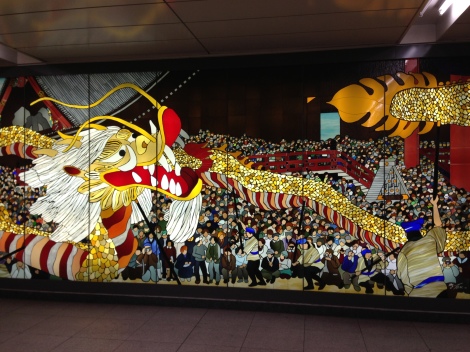 Here’s a mural on the wall of Asakusa station, one of the more historical districts in Tokyo that was very similar to many of the stations I saw in Kyoto (regretfully, I didn’t end up taking pictures of them while I was there).

And historical icons are scattered across the city in the most random of places. 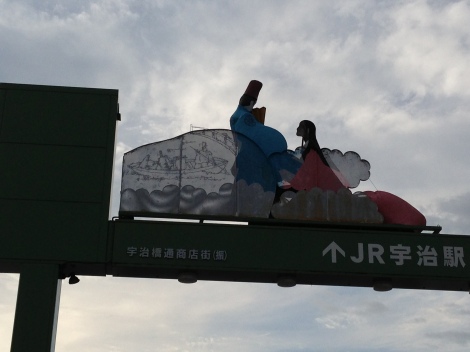 Like this “Tale of Genji” thing right about a sign pointing us to the JR train station.

The list of the ways Kyoto’s history has integrated into the present-day city could probably take up its own post, and most likely an entire thesis. Ultimately though, although it’s impossible (or at least, extremely difficult for me) to describe exactly, unlike Beijing, Kyoto makes the past feel as if it’s come to life. It’s a very different vibe from the ultra-modern metropolis that is Tokyo, which ends up somewhere in-between Kyoto and Beijing.

There’s a lot of stuff to do in Kyoto, and indeed I managed to see quite a bit during my time there. But I think this sums up more about the city (and my own experiences) than any specific description of my travels ever could.

2 responses to “Summer in Japan (Tentaibutsurigaku): My Return to Beijing and the Magic of Kyoto”