I’ve been listening to a lot of jazz renditions of anime songs recently, and so I got around to thinking about some of the relationships between the two genres.

Both are genres that seem to now be associated with nostalgia, a sense of looking back at times now past. Anime very explicitly tries to romanticize the past, what with all the shows focusing on high school and even times before, many focusing on making that era into something special. I mean, look at the way I’m sure the Japanese schoolgirl uniform has taken on new meaning, infused with a sense of “purity” and youth.

I’m more fuzzy on the historical development of jazz, but at least now it is very much seen as a music associated with a longing for the past. Almost all bar scenes tinged with regret use jazz music as part of the background. And jazz nowadays seems like a relic from a bygone era, such that almost by simply existing today it seems to tie in feelings associated with nostalgia the same way that old rock and roll does (note: I know that in Japan, and most other countries, jazz is much more popular than in the US, but I’m uncertain of whether it still has the same cultural significance of the early postwar era or is seen differently).

I’m always hesitant to bring “cultural tastes” into the mix, but Japan also has a thing for nostalgia and whatnot in their historical narratives and art forms, with their focus on things like mono no aware or the Floating World from stuff like The Tale of Genji or ukiyo-e. I mean, they still use much of the same motifs (e.g. sakura), so maybe there’s something there. 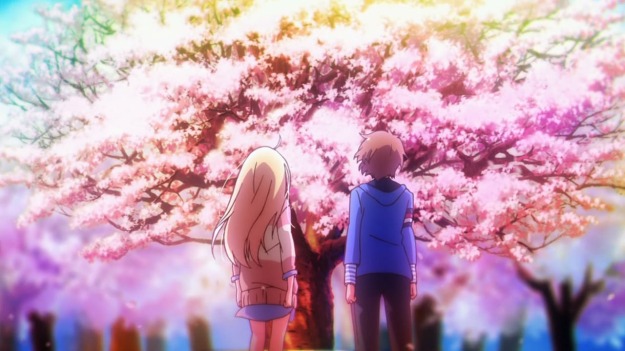 Taking all this together, the mixing of two seemingly thematically similar genres into “anime jazz” seems quite fitting to me. And this is just talking about the music – you get a completely different spin on things if you look at another type of “anime jazz” like Cowboy Bebop or Kids on the Slope.

You even see it featured prominently in shows like Trigun, where, like the shows mentioned above, elements of the past are big parts of the plot, both in terms of the setting/atmosphere as well as how it relates to the main character(s). And if we’re looking at Ghibli stuff, which is even more thematically focused on transition periods in the past, you can get something that’s pretty much guaranteed to be nostalgia-central.

Plus the whole point of these jazz anime songs is to bring back memories of the show while you’re listening to them (I mean, stuff like that is the whole reason people more generally have anime playlists in the first place, right?), so you get an explicitly nostalgia-inducing genre based on two nostalgia-focused genres.

Here’s a snippet of one of my playlists, for example.

Do any of your guys listen to jazz remixes of anime songs, or am I the only one here? And if so, do you have any favorites? I’d also be interested to hear what your favorite anime OPs/EDs are more generally as well.

5 responses to “Back of the Envelope: Anime Jazz”