These are a series of notes compiled over time concerning Azuma’s Otaku: Japan’s Database Animals, what I think is one of the most insightful books in the absolutely enthralling subfield that is anime(-related) studies. See Part 1 for context (and for a response from bricksalad!).

Notes on the notes:
All the text formatting is on my end. The bold is meant to highlight key sentences, concepts, and explanations. The italics (oh the the irony of self-negating italics…) is meant to indicate running commentaries in response to bricksalad’s notes (which I’m drawing heavily from) except when indented where it simply is used for emphasis. Portions of his notes have also been altererd where I’ve either rearranged things or inserted some of my own thoughts. Sections that have been explicitly cut out are noted by ellipses (“…”). Any use of a non-italicized ‘I’ is from the perspective of bricksalad, while an italicized one refers to me (Josh).

To answer this question, Azuma first will draw our attention to Otsuka Eiji’s Theory of Narrative Consumption. In essence, the theory states that comics or toys aren’t consumed in and of themselves, but rather their consumption is tied to a larger narrative. (I avoid the “grand narrative” now for obvious reasons.) So, for example, when one purchases a Gundam figure, he is consuming a single fragment of the Gundam universe. The more Gundam figures he buys, the larger of a section he has obtained. This activity, of consuming more and more of the larger narrative (in this case referring to the Gundam universe), is called “narrative consumption”.

And there’s a lot of narrative out there to consume.

So let’s say that a consumer consumes all of the pieces of a larger narrative. He can still participate in this narrative consumption if he chooses to add to this narrative. Rather than make a knockoff Gundam figure and get sued, he invents a “new” Gundam. Is it fake or real? This distinction is not applicable.

Now, Azuma goes off on a tangent about the modern and the postmodern models of the world. The modern model is one where the consciousness sees an outer layer of the world, and there is a deep inner layer that regulates the surface outer layer. This deep inner layer is a larger narrative; for example, if an outer layer is the behavior of man, then the inner layer is then the laws that regulate the behavior of man (much the belief of modern science, which subscribes to this view). Since postmodernism is skeptical towards underlying narratives, it needs a new model to replace this.

One way to replace the modern model is by eliminating the inner layer altogether. However, Azuma would like to propose a “database model” as a better alternative to understand the postmodern world. An analogy to help understand this model can be made using the Internet as an example. The Internet has no center, no grand unifying narrative. But at the same time, it isn’t just a bunch of outer webpages with nothing beneath. There is an accumulation of encoded information beneath different webpages. Individual webpages are made in accordance with users “reading them up”.

Now, I’m not sure exactly what Azuma means by “reading them up” here, but one way to look at this model is that the deep inner layer is still there, but rather than a grand narrative, it is a database. And this inner database is no longer isolated by the outer surface layer, but it can be changed by interaction with the surface layer.

Commentary (5):
If we want to go with the other idea though – that you can just eliminate the inner layer – then you have a more complete “collapse” of the larger narrative(s). Everything sort of becomes smushed together. Artists like Murakami Takashi propose the idea of “superflat” in order to convey this notion, meant to be the “flattening” of Japanese culture – bringing the “high” and “low” cultures such that they are on the same plane. This is frequently applied to the “flattening” of anything, narratives included. It also is tied with postmodernist thought, which seems (to me) to imply the inevitable deconstruction of hierarchies and the dismantling of boundaries and groups. All in all, I’d say that there is something to this idea – if not necessarily “superflat”, at least something similar – of “high” and “low” culture intersecting in fandom today (and so does Froggy-kun). 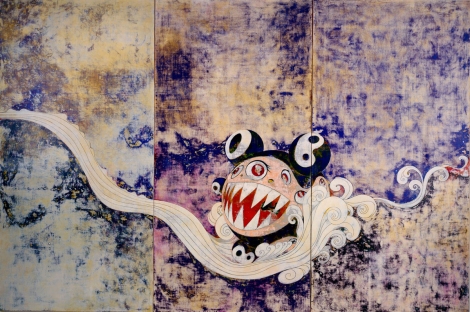 For example, take this piece that Takashi did to try and illustrate the idea of superflat . It’s done in a more traditional “high” style of wall art and traditional “Nihonga” painting, but then contains a consumerist-looking figure as the centerpiece that’s a cross between Mickey Mouse and Sonic the Hedgehog. Also half terrifying and half slighly…kawaii?

This applies itself quite conveniently to Otsuka’s Theory of Narrative Consumption; the larger narratives such as the Gundam universe are actually a database, to which information can be added or subtracted. The outer surface layer consists of the products produced from this database. Originals, simulacra, and even fakes, they all are tied to this database. The otaku culture, with its propagation of simulacra, is extremely sensitive to this double-layer structure since, more so than other consumers, they separate the works from the settings, the outer layer from the database.

Note: Here Azuma attempts to establish a more-or-less chronological narrative in order to split the anime fandom community and detail the evolution of this database model. Whether or not you fully believe him, his narrative is quite intriguing.

The first generation of otaku came from a time when the grand narrative had been lost, but the model was still ingrained through educational institutions and written works. People who reached adulthood in the 1960′s and 1970′s now had to cope with this paradox by forging new narratives. Hence Otsuka’s idea that the consumption of products was the consumption of a “grand narrative”. This applies to the first generation of Otaku, but it fades out beginning in the 1980′s (this transition period is where the second generation of otaku come in, and they begin to construct what will be the database model) and is gone by the 1990′s. Once again, a great example of this is the Gundam universe, where, at first, everything was produced in the same timeline and was a fully constructed alternate reality to our own but later has become a bunch of related shows connected related to some “worldscape” that they all draw elements from.

The third generation had grown up with the database model, and as such did not need a substitute for the larger narrative that had been “lost” (Azuma is coupling the first and second generations together here, but in light of how ingrained the database model is today, I’d agree that this is more than fine). They did not need a perspective on the whole world like the earlier otaku. A shift of interest occurred towards the facts and data of the fictional world rather than the meaning or message that may have been communicated. Thus the rise of “chara-moe”; feelings of moe towards characters which were just fragments of the fictional world in which they resided.

If the original fanbase of Gundam represented the first and second generations of otaku, then it was the original fanbase of Evangelion that represented the third generation – the thoroughly postmodern generation – of otaku. The Gundam fanbase was famous for its knowledge and completionist desire towards the “space century”. Evangelion fans, on the other hand, were not really all that interested in the universe as an exercise in worldbuilding. With all the Angels, secret government plots, and prophecies, what really interested consumers were the characters and localized setting. Perhaps great attention to detail was shown when building robot figures or drawing eroticized depictions of the main heroine, but other than that there was no immersion into the world of the works. 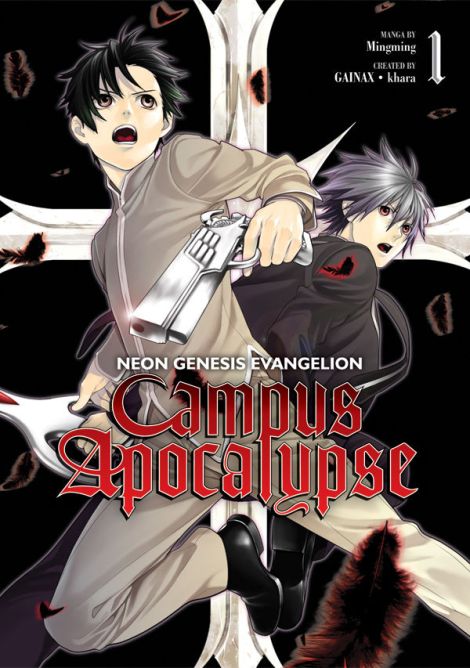 An interesting tidbit here is that the director of Evangelion, Anno Hideaki, interacted with this market from the beginning. One example is a scene from a parallel world that is inserted into the final episode. This scene was actually a parody of an image that had been widely circulated as a derivative work at the time of the original broadcast. Such a move playfully allows simulacra into the database rather than privileging itself as a main narrative.