On the fourth day of anime my waifu gave to me,
four Riki routes…
three Jormungands…
two rockin’ Joestars…
and a chu2 from KyoAni! 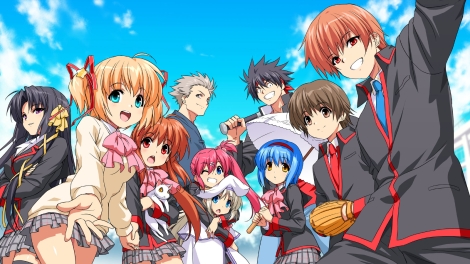 Well, okay – there are really 5 (or is it 6?) routes. But there should only be 4 left, right? So it’s not completely inaccurate. Not that I like the show enough to legitimately care too much.

At this point, I don’t understand why I’m still watching Little Busters!. I suffer through every episode (although to be fair, now that it’s gotten past Komari’s arc things are starting to turn around…slowly). So I’ll just spotlight the characters, with rants/comments in the picture captions.

Oh look, it’s Riki. He’s a girl pretty much. I feel sorry that he has narcolepsy, but seriously, I can’t get around to actually liking him. I’ve tried, but I really can’t. He really is a blank slate you’re supposed to be able to empathize with so you feel like the main character.

MUSLCES. Thank god he can offer comic relief. He’s also a mega-bro, and would probably be an awesome roommate.

Why, aren’t you and your cat adorable. One day, I’m sure you’ll learn how to talk to people, but until then, I can’t really feel for you much. Sorry ’bout that. Wait, why am I apologizing to a 2D character again?

I love his voice – it actually sounds manly! And you know what that means: he’s automatically awesome. Not nearly as awesome as I would’ve liked, but so far the things he’s done have been pretty cool.

Kengo’s hair is pretty great. I think this is the coolest scene he’s had so far though (I was thinking the ghost scene from the recent Test of Courage episode, but Masato was arm-wrestling a ghost while you were just swinging your sword around), although I do love your interactions with Masato. 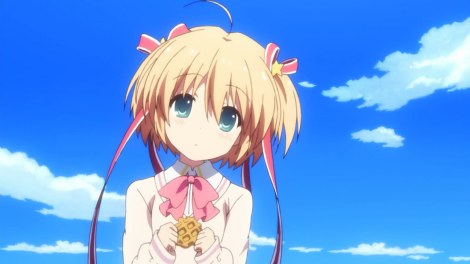 What a tool. The more I hear you talk the more I want to punch the screen. Now give me your candy!

I love my big-busted ojou-san’s as much as anyone else, but it still took until the Test of Courage episode for me to really warm up to Kurugaya. Which is way longer than it should’ve taken under most circumstances.

I can actually get behind you – your clumsy, but at least believably so, and you’re cute and honest. Also you like reading – I can dig that. Plus you have the mega-legit cap – that’s a plus. All the high-pitched female casts’ voices (sadly, your’s included) are grating on me though… 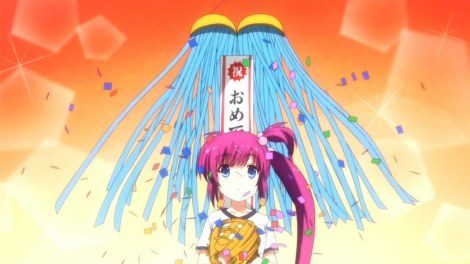 This is how I felt when I saw you enter the story. I was like, “you know, Saigusa-san is pretty cool and I dig the long purple hair.” And then you haven’t really done anything since because the show’s dumb like that, other than a few lines here and there and falling into Riki’s arms (ughhhhhhhhh).

Another girl I can get behind, not only because she reads books (yay!), but also because, like the others, they haven’t hit her arc yet. But as long as all of them are better than Komari’s, I think I’ll be okay. I hope. I mean, she’s the standard mysterious girl – maybe she’ll turn out (like in most Key stories) to secretly be able to use magic or something!

And that’s that. I’m incredibly disappointed with the show (I mean, I’d heard claims of it being the best VN ever, so this is a bit of a letdown), and hopefully it’ll slowly recover from the sour taste it left in my mouth during the first couple episodes.

Note: I took most of these photos from Random Curiosity, since they were just such high quality.

Edit: I forgot to include “Tweety”, so enjoy Kyousuke’s eagle friend from episode 11.

Still a better facial expression than Kristen Stewart…? He looks pissed though, as would I if I just gotten seaweed dumped all over me!